The family tree is massive and I try each morning to add a bit by taking families as far as the records go.  Today I was in Surrey, England near London.


The line of the Learned (Larned) family includes John and wife, Sarah and his father Robert (b 1540); and Thomas Gillman Jr. and wife, Hannah with Thomas Gillman Sr (b 1550) and his wife Ann Farwell. All of them are from the same village.  Curious, I looked up Bermondsey, Surry, England.


On the south bank of the Thames, at the time John Larned was born (1555) Bermondsey was a lovely, up-scale rural suburb of London – sort of a Winter Park to Orlando or La Jolla to San Diego.  And we can see them was they were on a festive day when the citizens turned out in their finest to party in the street – captured in a painting by Joris Hoefnagel called “Fete at Bermondsey” c 1569 (thank you Wikipedia!). Our Learneds and Gillmans could be in this group! You can see London across the river in the background. 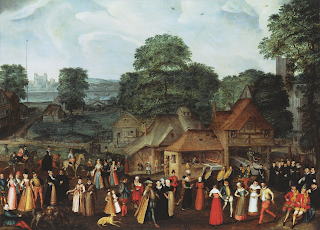 In 1590 John and Sarah had a son, William, who fell in love with Godethe (aka Judith) Gillman. They married in 1606 at St Olave. [“This is how Wikipedia describes the area: Other ecclesiastical properties stood nearby at Tooley (a corruption of "St Olave's") Street, located in the Archbishop of Canterbury's manor of Southwark, where wealthy citizens and clerics had their houses, including the priors of Lewes and St Augustine's, Canterbury, and the abbot of Battle.”]


In 1630 William and Sarah Learned bravely took their children, Sarah, Bethia, Abigail, Elizabeth and Isaac and sailed for America landing in Charlestown, Massachusetts.  Elizabeth Learned married another English immigrant John Hall from Coventry, Warwickshire. They were our immigrant great grandparents through my father, who lived in a suburb of Orlando not very different from Bermondsey. I wouldn’t be surprised if the Gillman’s and Leared’s were merchants, which it was Grandpa Shaffer’s nature to be.
Posted by aquilagold at 10:44 AM