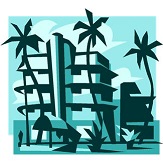 Right or wrong I have a certain picture of Miami County in my head. Regardless of whether or not the name originated with a Native American word, or the Miami Tribe, or the Miami River . . . Miami evokes palm trees and beaches, Cuban food and Jewish Delis. Having lived in Florida a very long time it can’t be helped!

There is another picture that comes to mind and this starts in another culture in a different time – the culture of the Deep South. Newberry County, South Carolina and Miami County, Ohio will always be linked in my mind. We have Quaker ancestors, a lot of them, back to the earliest beginnings in England. For a time, though, I lost them.  They just didn’t seem to hook-up with the Friends around Philadelphia as I had expected. Imagine my surprise when I found that they were in South Carolina and had come there via Barbados, probably through Charleston.  At first this just didn’t seem possible. I’m a northerner – in my heart rooting for the Union Army, working with the abolitionist, helping people along the Underground Railroad.  I couldn’t imagine that I had ancestors from South Carolina. These are my father's people.

Well, in the late 1700s a fiery minister visited that Newberry meeting where so many of my Quaker ancestors were and he spoke like a prophet of God and he told the Friends of Newberry to go north to Ohio, to leave their slaves and the slave owning states in the dust. He said he could see blood in their meeting house. Not all of the Friends owned slaves but those who did freed them.  Many of those Newberry Friends took his advice and a large portion of that community moved north to Ohio . . . and established a community and homes in Miami County. Did his prophesy come true? When the Civil War inevitably rolled around the old Quaker meeting house was used as a field hospital and there was indeed blood.

Over 100 years beyond the Civil War my husband and I visited Newberry, the cemetery, the courthouse, and chatted with the welcoming citizens of this South Carolina town who still felt financial reverberations of being abandoned by such a large group of prosperous farmers.  I would have to say that Newberry’s loss was Miami’s gain.  I notice that Miami County has a township named ‘Newberry.’  Most of my ancestors lived in Union Township near Ludow Falls.  I was surprised today to find nothing about the Quaker community when I perused websites for Miami information.  Such reference may be there, but I missed it. Of course, many of the Friends moved on to Indiana and then on to Iowa as territory opened up, but they must have had an impact on the county when they arrived from South Carolina.

Leaving the Quakers, what I did find on-line today was Reminiscences of Abraham Thomas from the Troy Times, 16 Jan 1868. This is a frontiersman’s story that begins in Kentucky and ends in Ohio. Look at the date that it was written. There is nothing PC about this – he is telling his truth as it was at the time he was living it. It is an interesting read: http://www.thetroyhistoricalsociety.org/abraham%20thomas%20stories/Pioneer%20History1.htm

The other thing I’d like to share about Miami County is the wonderful Barn Quilt project. Miami isn’t the only county in Ohio to have this project but they have done it big and done it well.  I sat today and clicked on every barn to see the beautiful quilt squares that have been painted on them by Jose Rafael Santoyo.  The project’s primary sponsor is the Miami County Visitors and Convention Bureau and the barns are a way to connect the small towns and get people out on the road to see them. I’d say this project is a smashing success. There are a couple of links to follow.

At Barn Quilt Tour of Miami County you will find more information of these beautiful quilts.  Don’t miss it!