Saluting Our Veterans ~ Saluting the Fallen 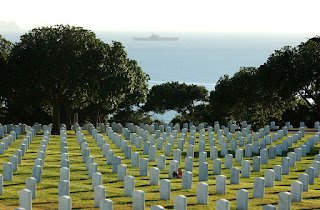 Fort Rosecrans National Cemetery,
with the aircraft carrier USS Midway (CV-41) in the background.
(Where Jim's grandparents are buried.)

If you Google a timeline of war, you will clearly see that human beings are warlike creatures, who are constantly in conflict with each other somewhere in the world. Peace is a rare and treasured state that is all too easily cast aside if we feel wronged or threatened. I’m sure you’ll agree that although this is the case, the constant striving to learn, to change, to break that violent cycle and move into a state of balance and peace, where differences can be worked out by non-violent means, is the ideal.


Looking back, though, we are trailed by death and destruction in every era. Even our generations of peace-loving and conscientious objecting Quakers couldn’t avoid getting caught up in the American Revolution and Civil War as the fighting swirled around them. Not willing to take up arms against their fellow man they provided food, supplies, shelter, abolitionist zeal, and medical aid to those who did. Like our Quaker ancestors our most recent generations have chosen not to join the military.  They are peaceful and more interested in the arts than the art of war ‘and I say’ (to quote the Beatles) ‘give peace a chance’ – Good For Them! – It is with these younger generations that we as a human race can begin to break that terrible cycle of war.
Still, humans are aggressive, war-like creatures and no peace is kept without vigilance and for that we are forever grateful for a strong, well-equipped defense.  Looking back on American conflicts we had brave men in most of them from King Phillip’s War to Vietnam.  And, along with them countless women and children were left behind to run the farm and keep the home-fires burning. I’ve drawn up a sampling of veterans from our family history to salute.
Family, I hope you will take a moment on this Veterans Day to thank each of them for the time they served – the men and their wives and children. . .

King Phillip’s War  [Just in case you thought New England tribes were peaceful (ala Thanksgiving).]  Our ancestor’s paid for their land with their blood in New England, New York, Georgia, the Carolina, Tennessee, Kentucky, Pennsylvania, and Ohio. The natives didn’t go peacefully. Atrocities were committed on both sides. This bloody history was scrubbed from our history books and a much milder version presented to us as elementary school children.

“The war [King Phillip’s] was the single greatest calamity to occur in seventeenth century Puritan New England and is considered by many to be the deadliest war in the history of European settlement in North America in proportion to the population. In the space of little more than a year, twelve of the region's towns were destroyed and many more damaged, the colony's economy was all but ruined, and its population was decimated . . . More than half of New England's towns were attacked by Native American warriors. King Philip's War began the development of a greater European-American identity. The colonists' trials, without significant English government support, gave them a group identity separate and distinct from that of subjects of the king.” - Wikipedia


We have many more veterans than those listed above, it is just a sampling. We are left with a deep appreciation for them . . .and the awareness that we are the end result of generations of survivors. These are the men who returned from war to father children and create more generations. And it leaves us with a deep sadness for the thousands upon thousands of bodies left behind, snuffed out, and ended – never to contribute to future generations. To them we owe reverence and respect, sorrow and regret. What would the world be if all the rows of tombstones in all the National Cemeteries were blank? What changes might have been made if Obediah Smith or John Jones had lived? We’ll never know – but we salute you – we survivors. We hope we can do better with our present and our future. Peace.

Posted by aquilagold at 7:15 AM