In my last blog post ‘Genealogy Place Names – 'A' I introduced a project for my family that looks at the places where our ancestor’s lived. Where they lived is important as it helped shape who they were. I started with Aachen, a German city that contains Charlemagne’s glorious cathedral. Aachen was the primary residence of Charlemagne, and we are Charlemagne’s children. By now he has millions of descendants and we stand among them – which means that area of hot springs and easy access to Belgium and The Netherlands is part of our bones. Each alphabetic report draws from the first and last place names of that letter. The second place for ‘A’ is Ayrshire, Scotland.
Now in this post we will look at the ‘B’s.  These are random picks on my part and what came up was Babenberg Castle and the area that became Bamberg, Germany. Then at the end of the ‘B’s I found that city with the ever shifting name: Byzantium, Turkey – or, if you will, “Istanbul, not Constantinople”.
A word about multiple generations.  Heinrich Franconia, Margrave of Austrasia is listed as my 30th great grandfather. That’s ridiculously far back. He, no doubt, has millions (literally) of descendants.  Are we special because this is our dear 30th great grandpapa? Well, we have to take all of this with a grain of salt. Our ancestor chart blooms exponentially to a point, but cousins marry and that pyramid shaped chart turns into a diamond. I get it, but I’m not very good at explaining it. Here is a link to an article that will keep us humble.


From now through to the letter Z I’ll post the alphabet reports I’ve done for my family. I hope my blog readers will find these places interesting and will be inspired to study up on their ancestors’ homes.


B is for Badenburg and Byzantium
Badenburg Castle, Holzkirchen, Bavaria, Germany


Keep in mind that although this was the Badenburg dynasty the city and castle eventually became Bamberg, Germany
Henry of Franconia

Henry (died 886), possibly a son or grandson of Count Poppo of Grapfeld, was one of the first Babenbergs, was the most important East Frankish general during the reign of Charles the Fat. He was variously titled Count or Margrave of Saxony and Duke of Franconia.

Henry was the ancestral lord of a castle, Babenberg, on the River Main, around which the later city of Bamberg was built. He enjoyed the favor of Charles the Fat and was his right-hand man in Germany during his reign. He led a surprise strike on a force of Vikings prior to the Siege of Asselt, but it was unsuccessful. When, in 885, Charles summoned Hugh, Duke of Alsace, and Godfrey, Duke of Frisia, to a court at Lobith, it was Henry who arrested them and had Godfrey executed and Hugh imprisoned on Charles' orders.

In 884, when Charles succeeded to the throne of West Francia, he sent Henry there to lead the March of Neustria against the Vikings. In 886, he was sent to aid the besieged of Paris. He did not stay long but returned later that year with Charles. However, Henry died in a skirmish with the Vikings while en route.

As you can see this is just a teaser for Henry’s very eventful life. He died in the field and his death is described by his men.


Byzantium is how it came up on the place report but that isn’t exactly accurate. By the time Euphrosyne came along it was called Constantinople, and of course it is now Istanbul.  Whoa, this is exciting stuff – see below.
https://en.wikipedia.org/wiki/Byzantium


Euphrosyne was the first daughter of Grand Prince Mstislav I of Kiev and his second wife, Ljubava Saviditsch. In 1146, at the age of 16, Euphrosyne married King Géza II of Hungary.
During her husband's reign Euphrosyne did not intervene in the politics of the kingdom, but after his death on May 31, 1162, her influence strengthened over their son, King Stephen III. The young king had to struggle against his uncles Ladislaus and Stephen to save his throne, and Euphrosyne took an active part in the struggles. She persuaded King Vladislaus II of Bohemia to give military assistance to her son against the invasion of the Emperor Manuel I Komnenos.

Euphrosyne's favorite son was the youngest, Duke Géza of Hungary. When King Stephen III died on March 4, 1172, she was planning to ensure his succession against her older son, Béla, who had been living in the court of the Emperor Manuel I Komnenos. However, Béla came back, and he was crowned on January 13, 1173, although the Archbishop Lukács of Esztergom denied his coronation. Shortly after, King Béla III arrested his brother, which increased the tension between Euphrosyne and her son. Duke Géza soon managed to escape, probably with Euphrosyne's help, but in 1177 he was again arrested. 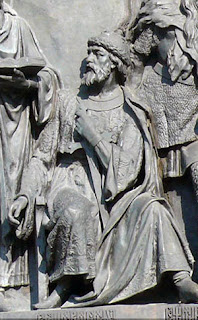 In 1186, Euphrosyne tried to release her younger son again, but she failed. King Béla III ordered the arrest of Euphrosyne and kept her confined in the fortress of Barancs (Serbian: Braničevo). Shortly after, Euphrosyne was set free, but she was obliged to leave the kingdom for Constantinople. From Constantinople she moved to Jerusalem where she lived as a nun in the convent of the Hospitallers [That’s the Knights Templar, right?], and then in the Basilian monastery of Saint Sabbas.

I’m pretty stoked that this fierce woman is on our tree! This is the stuff of epic movies!


Credit: Most of the above information comes from Wikipedia.
Posted by aquilagold at 5:53 AM