This report on the letter “C” of place names in our family starts with a mistake. Although mistakes that are found on ancestry.com are frustrating it demonstrates why I consider the website and it’s wonderful tree a worksheet in progress and not a family tree cast in stone. I started off with Cadbury – a great name with a sweet connotation – all those wonderful Cadbury Easter eggs. Then, as you will see, I find that someone has placed a wrong child in a family and it is not our line at all! And, to top that off Cadbury eggs come from London, not Cadbury!  If you are an Anglophile you will enjoy these Wikipedia articles of this area rich in history. The article on Wynebald de Ballon (not our family) is a good example of an early Norman Lord.  It is part 2 of this alphabetic report that holds a treasure – a truly great man.

Be sure to read part 2 about Ebergard “Evrard’ di Friuli I and the fabulous wine making area that was part of his domain.
Cadbury, Somerset, England
(Yes, those wonderful Cadbury eggs come from England and were founded by John Cadbury, but they are headquartered in London.)
How romantic – Cadbury Castle and the area seem to be Camelot! (Control – click on links)

https://en.wikipedia.org/wiki/South_Cadbury
Mabilia de Ballon  1125-1156
The Normans (French) were conquerors of England in and around 1066 a great deal of English land was granted by William the Conqueror to the Norman lords. Wynebald de Ballon was one of those lords.  He took over North Cadbury Manor in Somerset between 1086 and 1092. It apparently was his primary residence although he had multiple land holdings. The manor then passed to his daughter Mabilia’s husband, Henry de Newmarch. Certainly in a perfect world she would have inherited her father’s estates but by English law she could not.


It is with this alphabetic exercise and Mabilia of Cadbury that I’ve uncovered a mistake in the family tree. Someone placed a cuckoo in her nest – a child that was clearly not hers and he was our ancestor.  I’ve had to disconnect our family from this Cadbury family – they are not our great grandparents. We did have many who were Norman lords, so I will keep Cadbury here as an example of the Normans who represent a great deal of our family in France. 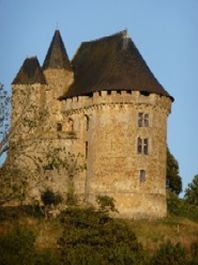 Above is a later version of the birthplace of the Wynebald de Ballon and his brothers.  This is Donjon de Ballon, know as the Gateway to Maine 12 miles north of Le Mans, capital of the ancient province of Maine. (The modern region of Pays-de-la-Loire in France. ) The area was conquered by William, Duke of Normandy (William the Conqueror) in 1066 before his invasion of England. The de Ballon brothers must have joined William at this time but it is not known if they fought in the Battle of Hastings. [The Battle of Hastings was a huge turning point for France and England, so check it out on Wikipedia!]

Ebergard “Evrard’ di Friuli I, ‘Saint’ Margrave of Friuli  820-866
Our 32nd (34, 35) Great Grandfather - Can you imagine – we have a ‘Saint’ as an ancestor. Well, we have several. This is one I’d like to travel back in time to meet. He is also called ‘Margrave’ which most often meant Military Governor.

This is a famous wine making area. See below:
https://en.wikipedia.org/wiki/Friuli-Venezia_Giulia_wine
This is the link to follow to learn about the life of Eberhard and his connection to Cysoing. This was one of the great men of his time and for the ages. If you read only one article in this post  – read the article on the Find A Grave site. It is excellent. 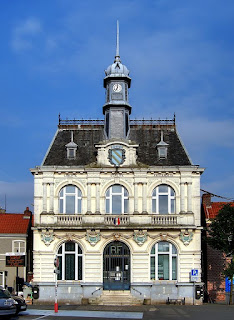 Cysoing – Chateau de l’Abbaye – photo by Musette Thierry
Once again a big thank you for the wonderful information from Wikipedia. Please support them financially as you can.
Also, a special thank you to Find A Grave, now owned by ancestry.com, for the great entry for Ebergard “Evrard’ di I

Posted by aquilagold at 4:20 PM