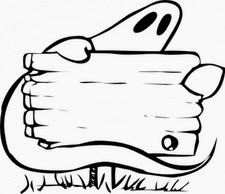 ﻿
Sometimes a little bonus falls into your lap, or onto your computer, as it were.  I couldn’t believe what I found this evening while going over my list of Ohio videos.   I’ve mentioned Ohio ghost towns before but Whoa! This place was mentioned in my Belmont County post back on August 10th   I had no idea there was a video of it on YouTube. Amazing.
I mentioned in my post that after her husband John died, Mary Moore and four of her 13 children moved to Belmont County. In 1825 they walked from Maryland through the forest and down Zane’s Trace, still not much more than an improved Indian path, when Mary stopped and decided she wasn’t going any farther and that this spot on Stillwater Creek near Sewellsville would be her home.


As Spiritseeker01 mentions in the introduction to the video – communities like this were abandoned when the coal mines gave out in this Appalachian area. This is all that’s left of Mary’s Sewellsville.  It must have had nothing when she stopped in 1825 and it is going back to nothing in 2013. Even Mary eventually abandoned Sewellsville to move closer to her son near the Crabapple Presbyterian Church in Wheeling Township. Mary is buried in the Crabapple Cemetery.


Still I can’t help feeling that Mary wants us to remember her as an intrepid pioneer woman.  I’d love to follow her path from Maryland and see where her property was by Stillwater Creek in the woods.

This second video is Beethoven's Ode to Joy and winter scenes from near Athens, Ohio - not far from Crabapple Church and Cemetery.  It has lovely photos and music but it is long; so only watch as much as interests you.