A good part of the day I was sitting in San Diego County but immersed in Belmont County, Ohio. In this mostly rural county that is located in Ohio’s section of Appalachia I could picture a lovely fall-ish day with golden leaves and strolling through the pumpkin festival with a friend, going out to

Dickinson’s and returning with great photos of Texas Longhorn cattle, visiting a country church and Crabapple Cemetery. We might catch a boat ride on the Ohio River and stop in Wheeling, West Virginia for dinner. The next day I wouldn’t want to miss the opportunity to see Dysart Woods – an unglaciated primeval oak forest.
I’d stop at the Underground Railroad Museum and purchase a lovely glass vase at the Imperial Glass Museum as a memento of the trip. I’d stop at the impressive county courthouse in St Clairsville and then go to Flushing and Stillwater Creek near Sewellsville to see if I could find the locations that ﻿ were once family owned.  I have a feeling it would be a very nice weekend.  I found no mention of 'the birthplace' of William Dean Howells, Belmont County's most famous son. Certainly there must be a nod to the Dean of American Letters, the shaper of modern American literature, and editor of the Atlantic Monthly. He died in 1920 and possibly there aren't enough who remember his large presence in the literary world; but I hope somewhere, maybe a library, there is a nod to this great man and a complete collection of his work. 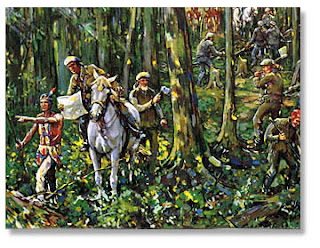 My 4th great grandparents John and Mary Scarborough Moore were Marylanders who married at St. John’s Parish in Harford County Maryland, where they settled and raised a family of thirteen children. When John died at the age of 49 in 1825, Mary and most of the children turned toward new lives in the wilderness of Ohio. The children ended up in various counties but Mary and her sons, Joseph and Amos, and her daughters, Charity and Emily settled with their families in Belmont County. At first Mary located at Stillwater Creek near Sewellsville. I can see her walking along Zane's Trace and deciding she'd traveled far enough. Later on she made her home with Joseph, who lived east of Flushing. The Moore’s were Presbyterians and they lived near the Crabapple Presbyterian Church.  Mary was buried in Crabapple Cemetery.
My third great grandparents were George Carscadden (often shortened to Scadden or Skadden, or spelled Karscadden) and Margaret Ann Moore.  They settled in Harrison County and raised 6 children in addition to the three girls from Margaret’s earlier marriage to John Moffat.  It was George and Margaret’s daughter, Susanna, who married John Clarence Robb. My mother’s maiden name was Robb and these are her people.